SAP BLOG 5 reasons to use subcontracting MRP areas in S/4HANA.

As of the first release of S/4HANA, there is no separated planning stock segment for subcontracting without the use of subcontracting MRP areas. Of course that this is a big change for customers who were used with planning in the old scenario, but there are some advantages in planning with MRP areas and we will see them below.

The subcontracting planning segment which we were used to see in ECC (highlighted in the figure below) no longer exists in SAP S/4HANA. It means that, without using MRP areas, there will be no separation between the stock provided to the vendor and the plant stock, from a planning perspective, and MRP will not know how much stock we have already provided to the vendor. 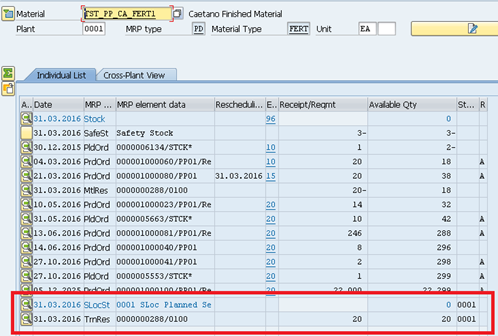 As I mentioned above, without MRP areas, there will be no separation between the plant stock and the stock provided to the vendor, which means that MRP will not know in advance how mush shortage of material we have in the vendor side and it will not plan to transfer the stock from the plant to the vendor.

It means that, without MRP areas, we will have additional manual steps, that is to manually transfer the stock from the plant to the vendor and we may even have delays, due to shortages in the vendor.

3 – Third-Party scenario does not work without MRP areas

This is not exactly something new in S/4HANA, since the third-party scenario in ECC was only possible with MRP areas, but it is a very important topic.

With the third-party scenario. we won’t need to receive the components in our plant and then send it to the vendor, which means less steps in the supply chain and less manual activities for planners.

4 – No need to assign MRP areas in the material master

If we want to use subcontracting MRP areas in SAP ECC, we need to first create the MRP areas in customizing and then assign them to the material master, so that MRP can plan at MRP area level.

In addition, we have a mass processing report (RMMDDIBE) to create and maintain MRP areas in the material master.