During the last S/4HANA conversions, which I was fortunate enough to accompany, it became particularly apparent that, in addition to the technological challenges and the adaptation of new functions, the cooperation between departments had to be adapted, sometimes drastically.
One of the most popular challenges was the need to bring internal accounting (CO) and financial accounting (FI) closer together. Here, the responsibilities were reassigned with every S/4HANA transformation I know of.

SAP CO and FI – nearly all customers are affected​

The introduction of the so-called “Universal Journal” in S/4HANA Finance is probably the innovation that affects every customer, regardless of industry. SAP is pursuing three objectives with the complete transfer of the previous distributed data model into a central data model.

The previous division between the Controlling (CO) and Financial Accounting (FI) modules reflected the strict division of the two accounting areas that has been customary in Germany for fifty years. In the processes and data management of the SAP ERP system, this separation was achieved by transferring costs, after they had been entered in accounts in financial accounting, to separate objects in the controlling sphere – the so-called primary cost elements – when the appropriate customizing was carried out. These cost elements have the same number as the corresponding FI account, but are otherwise completely independent of the FI area. All repostings, distributions and activity accounting in Controlling are then carried out in separate data sets, separate from the financial accounting. If account assignments from the FI area were influenced by controlling processes, a considerable reconciliation effort was necessary at the end of the period.

By merging the internal and external accounting groups in the Universal Journal, these reconciliations are no longer necessary. This naturally leads to a merging of the areas of responsibility. The most obvious change is the integration of controlling into the account logic of financial accounting. This means that the secondary cost elements, previously objects which were only known in the Controlling data model for redistribution, settlements and calculations, will now have their own account, just as the primary cost elements already have. Since the rule already applied in the ERP system for primary cost elements was that the cost element number had to correspond exactly to the corresponding FI G/L account number, while for secondary cost element numbers it was generally not allowed to have a G/L account with the same number, the automatic creation of secondary cost elements as accounts during the S/4HANA conversion never leads to errors. Nevertheless, these new accounts under S/4HANA now appear in FI balance lists, balance sheets (unassigned accounts) and similar reports if they are not explicitly excluded in the filter. In addition, in addition to employees from financial accounting, controlling employees also work with the transactions for creating G/L accounts (e.g. FS00).

For this purpose you have to make sure to plan appropriate training courses, adjustments of the process flows and authorization changes in the project. 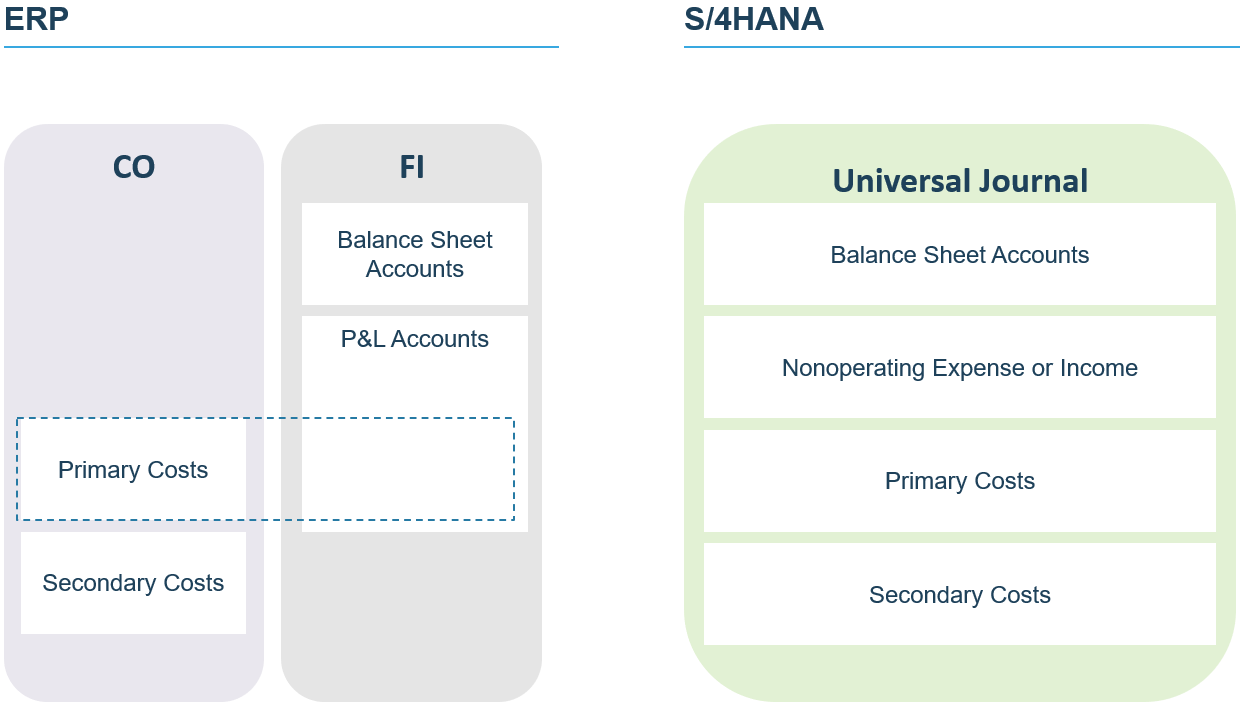 The account sheet is the only source for master data for FI and CO in S/4HANA​
In the interaction between financial accounting and Controlling, it is also the period-end closing, which always requires special attention during the conversion to S/4HANA. Since the data basis for both groups is now the Universal Journal, closing the posting period in SAP FI, you automatically won’t be able to make any postings from controlling applications. This also applies if it is only a transfer posting between a CO account assignment object such as a cost center or internal order without changing the balance on the corresponding G/L account. The possibility to carry out FI-relevant postings from CO applications even after the closing date of the financial accounting can be created via new setting options. Nevertheless, a closer coordination between the departments under S/4HANA is advisable.

The introduction of the Universal Journal promotes the growing together of the two accounting systems. In projects, it repeatedly turned out to me that the two topics of “month-end closing and period locking” and the joint creation of master data (accounts) require early and open discussion between the traditional external and internal accounting departments. The technical possibilities are all available. Now it requires unbiased minds on both sides to define the appropriate accounting process which unleash the power of S/4HANA.