SAP BLOG S/4HANA MRP – to Live or not to Live: Planning scope


The article is inspired by a question Define sequence of MRP areas in MRP Live planning scope risen by Offshore Development. I have provided a work around proposal there but at the same time I have realized that the lack of planning scope or selection criteria by MRP areas is a serious deficiency of MRP Live.

Let’s consider the following scenario in trading, buy-and-sell business. A company is running a simple supply chain consisting of 3 distribution centers A, B, C. 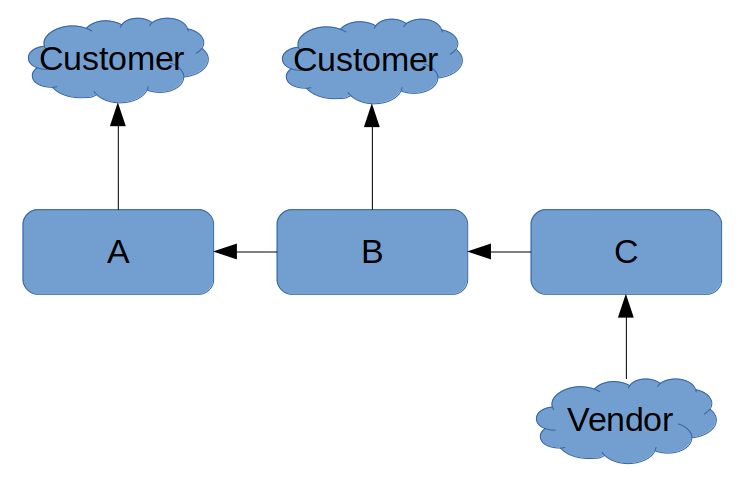 
Now let’s see how this simple scenario can be implemented with MRP Live, first using plants, then using MRP areas.


The distribution centers of our supply chain could be implemented as plants. If so, we have to options to implement the planning scenario.


*) T439C is one of the table of MRP classic planning scope definition.

MRP Live claims, it is able to figure out the planning sequence internally. Therefore to implement our scenario it would be sufficient to just run MD01N for all three plants. That would be perfect solution just to dump all the plants to MD01N and get perfect results.

Yes, it would be, if the software was flawless. However it is not. No software is bug free. It is enough to see the number of correction notes on MRP Live. Therefore I would feel much more secure if I were able to control the planning sequence.

Also issues resolution would be much easier if the planning sequence was known a priori, not figured internally during MRP execution, especially that MRP Live lacks tools to evaluate MRP results – see S/4HANA MRP – to Live or not to Live: MRP lists.


The only method to manually establish planning sequence of plants in MRP Live is to run MD01N for one plant at a time and repeat the process for each plant. Or to schedule background job with as many steps of PPH_MRP_START report as there plants in the planning sequence.

That works, for sure. The problem I see here, is that the planning job has to be set up manually in PRD system and anyone with enough authorization can change it and no MRP controller will know about that.

In contrast MRP classic planning scope is a configuration setting. It has to be changed in DEV environment, tested in QA and transported to PRD. It undergoes change management process.

In my opinion planning scope is just safer.

Another issue with this approach is how bad it is going to harm MRP Live performance and paralelization?

As you see, the scenario is implementable with MRP Live on plant levels. However it gets much worse when we contemplate MRP areas.

An MRP area represents an organizational unit for which you can perform material requirements planning separately.

An MRP area can include one or several storage locations of a plant or a subcontractor. You can define MRP areas in a plant.

By defining MRP areas, you can perform MRP for each area. This means the right quantity of materials can be provided on time for each area, such as a production line, a storage location for spare parts, or subcontractor stock.
Genişletmek için tıklayın ...

Notice – MRP areas are to be planned separately! A the same time SAP Help under MRP Live: Planning Scope reads:

No selection option is available for planning individual MRP areas. The planning run is always performed for the complete plant.
Genişletmek için tıklayın ...

It means MRP Live defies the sheer definition of MRP areas, it does not provide for separate planning of MRP areas! That is the first problem.

Another problem is that MD01N doesn’t select by MRP areas – it just plans all the areas in the plant But in what sequence???

Here we don’t have any control whatsoever and SAP Help gives nothing on the MRP areas planning sequence. I highly doubt if MRP Live implements similar logic here as with plants sequence.

The only solution I could see is to implement an enhancement using MRP_DISPATCHER_BADI, method AT_PLANNING_FILE_ENTRIES_READ – see Define sequence of MRP areas in MRP Live planning scope

It is just not right that the intelligent ERP drops the ball on MRP areas planning sequence.​


MRP areas are prominent in S/4HANA. They are obligatory. They have superseded storage location MRP. Subcontractor’s stock planning relies heavily on them. In my opinion these are the changes in the right direction as MRP areas are powerful tool in MRP planning, often underutilized.

The problem is that MRP Live lacks flexibility in handling MRP areas, the scope of planning and planning sequence.

Here I would plea to SAP :

Disclaimer: Opinions and views expressed herein are solely my own.