Here we are discussing on TRM important functionalities…

TRM site 100 is created for warehouse 100 AMSTERDAM . TRM is used for the execution of warehouse movements. Each movement is related to a WM transfer order. TRM stands for Task and Resource Management. With the use of TRM, movements (transfer orders) in the warehouse are divided into one or more tasks, which have the following advantages:

– Visibility of actions/steps/status for an warehouse movement (A transfer order is no longer a ‘black box’).

– Management of resources performing tasks in the warehouse.

– Calculation of the best possible route in the warehouse, considering distance, time and resources.

A task can be described as a physical operation or movement created from requests and executed by resources.

zone is a physical location in a site dedicated to a specific function, for example:

Storage zones are assigned to storage bins and staging areas. P&D zones are created to use for temporary storage of goods. 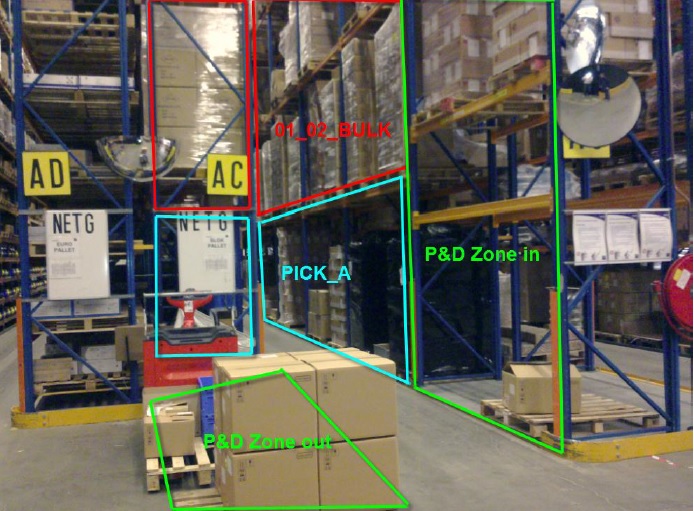 The concept of the TRM setup regarding the bulk and pick areas consists of:

The above described setup of aisles within TRM is valid for the following aisles:

The main difference is that no Pick up & Drop off points have been defined for the reach truck aisles (such as aisle 09_10).

A node is a point in the warehouse through which resources may pass (logical node) or where goods are to be placed (physical node). For each defined Zone, one or more nodes are defined.
For the setup in site 100, the following types of nodes (including an example) have been setup: 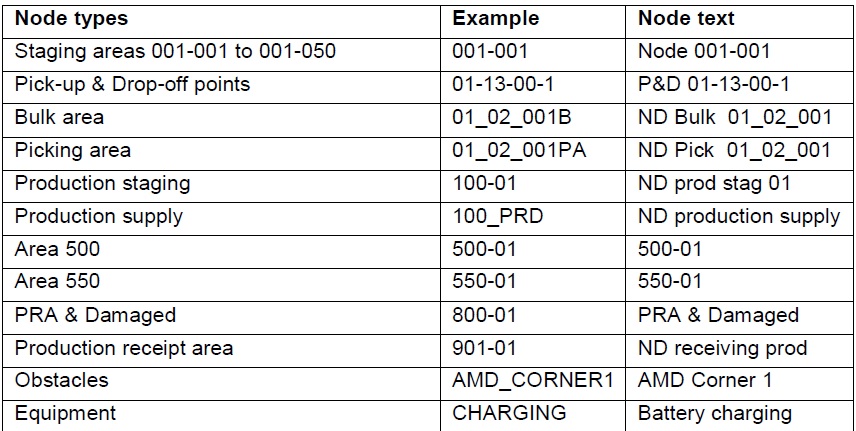 For each node, an X, Y and Z coordinate is included in the setup, to define the physical location within the site. These nodes and coordinates will be taken into account for route calculation, task creation and selection. Each node represents either an obstacle or an entry and/or exit point of a zone. A zone may have several nodes, however a node is linked to precisely one zone.
By linking entry/exit nodes to their respective zones, SAP is able to define the correct node from and to a zone.

For each entry/exit point for an aisle in the warehouse in Amsterdam, 11 nodes have been defined in order to facilitate the setup and concept:

Zones can be grouped into ‘Zone groups’. By grouping together zones, it is possible to simplify the definition of working areas.

A working area can also be described as a possible route between 2 zones or zone groups.
In order to allow for a task to be created between zones, these zones must be included in the setup of a working area (by using the zone or zone groups).

For example: To allow a TRM supported replenishment movement from bulk to pick working area REPL_01_02 has been created:

This working area is used for a replenishment task from the bulk area in aisle 01_02 to the picking area.

In general, it is not allowed within the setup of working areas, to allow an overlap of zones. An overlap occurs, when both the source zone (or zone in the source zone group) and the destination zone (or zone in the destination zone group) are included into more than one working area. This situation is not allowed within TRM, because the system must have unique working areas in order to determine and calculate the correct routes.

The setup of a TRM site is based upon a three-dimensional grid, consisting of X- (length), Y-(width) and Z- (height) coordinates. This grid is applied to the physical warehouse. All relevant objects can be geographically defined by adding XYZ-coordinates, starting from one predefined reference point.
This applies to:
– Nodes
– Obstacles
– Storage bins
– Staging areas
– Resources

The coordinates play a major role in task creation and task and route selection. The most efficient route and resource, defined by the system is relying on the XYZ-coordinates.

Route Management is responsible for route information and providing route duration and priority calculations. Regarding routing, 2 separate processes (run in the background during task creation) are responsible for creation and selection of tasks: 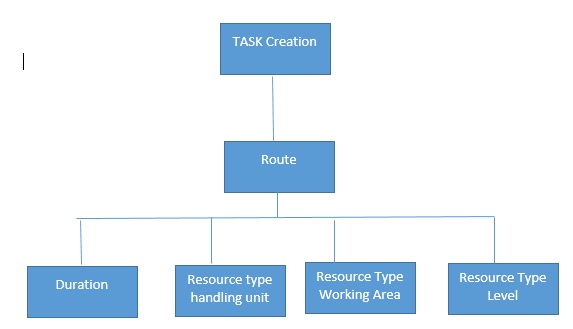 For each created task, it is possible to display the effectuated priority model. From within the TRM monitor, the priority model can be displayed by selecting the Explain priority option: 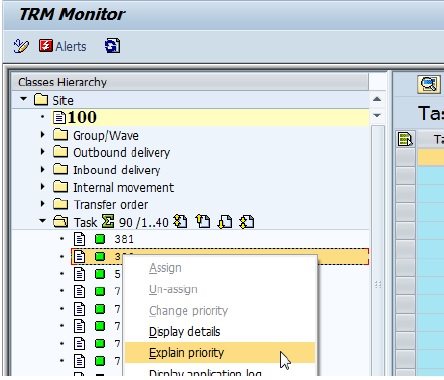 The result is a visual overview of the entities of the priority model, including the respective weighing factors and weights. An example of such a model: 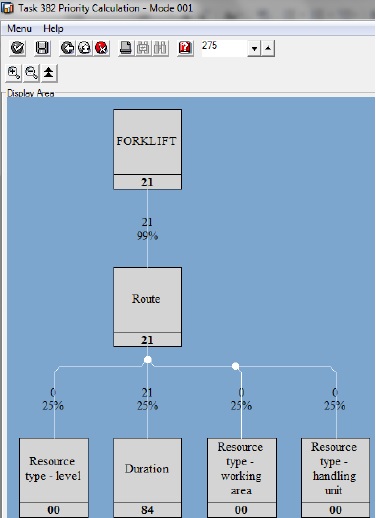 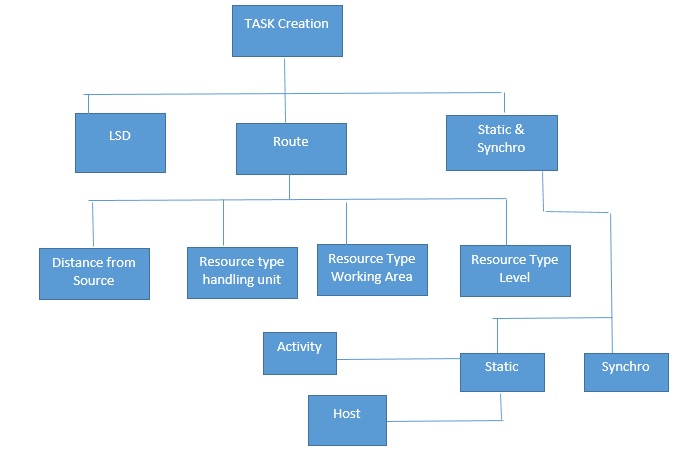 Latest starting date a priority that increases linearly from 0 to 99 during the task Critical Time Window.

Route
Distance from Source takes into account the current position of the resource in relation to the source of the task.

Resource – working area takes into account the preference of a resource to work in a specific working area.

Resource type – level takes into account the preference of a resource type to work in a specific level
Static & Synchronization.

Host Reflects the importance of the originating instruction from the host compared to other host instructions.

Activity Reflects the importance of a particular activity compared to other activities
Synchronization Takes into account the relationship between related tasks.

From within the TRM monitor (LTRMS), the priority model can be maintained by right-clicking on the site number, choosing ‘maintain mode’. Double-click on the box ‘Mode 001’ displaying a graphical overview of the priority model (high level): 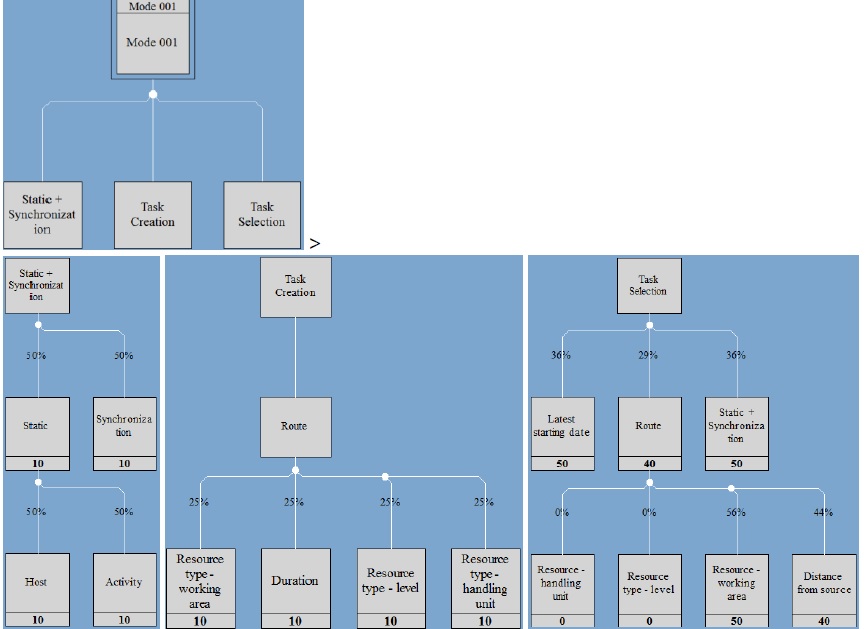 The priority calculation for each factor is based upon the formula

Taking into account the available resources (resource types), all possible routes are determined between the source and destination of a movement within the warehouse. In a standard TRM setup, request management is responsible for creation requests based on reference documents, such as transfer orders.

Based upon the created requests, task are to be created. The following options are available for task creation based upon requests:
– Manual from the TRM monitor
– Background creation of tasks using a scheduled background job
– Automatically and directly after the creation of the request.

For the Amsterdam site, tasks are created directly and automatically upon the creation of the requests. This has been realized by implementing BADI ZEULE_TRM_REQ_CHANGE, using method CHANGE_TO_REQUEST.

After task creation, the movements which need to be performed are available, however no resources have been selected to execute the task.

During task selection, it is known which resource will perform the task.
A resource uses its presentation device to log on and selects a task in one of three modes/processes:

The resource explicitly determines the task that needs to be selected by choosing an appropriate option from the presentation device menu.

The resource scans a handling unit and Task Management assigns the task to the resource.

System-guided mode
After selecting a system guided option from the RF-menu, the qualifications of the resource are taken into account. All available tasks for which the resource is capable of performing are collected (eliminating all tasks which cannot be performed at that time, due to active defined execution control objects (ECO’s), not in use in Amsterdam). The available tasks are sorted by priority.
The result is that the task with the highest priority is assigned to the resource.

After selecting the system guided mode from the RF-menu and encountering an ECO, the semi system guided mode takes effect and the qualifications of the resource are taken into account. All available tasks for which the resource is capable of performing are selected, and listed by priority.
The resource is requested to go to the source zone, without being assigned to a specific task. The resource has the liberty to perform a task by scanning any handling unit within that zone, based on the scanned handling unit, the relevant task is selected and assigned to the resource.

For Amsterdam, for the relevant source zones, execution control objects have been created in order to be able to use the semi-guided mode.

A task bundle is a group of tasks assigned together to one resource.
For a delivery/TO with multiple lines, it makes sense to create a pick bundle for relevant tasks. This allows the picking to be performed in more logical way. For example if for one delivery, a pick needs to be done from several bins, a task bundle allows for the picking of the materials from several bins (basically working on several tasks simultaneous) without having to confirm the destination for every single task immediately. Instead, the pickings are confirmed on a HU (for example a pallet), and the complete HU is confirmed at the destination.

The creation of a task bundle is only possible through the implementation of a BADI. BADI LTRM_TO_RQST_CHANGE for the Amsterdam site. if you want to implement customized BADI then copy from the standard and create – Customized (ZEULE_TRM_REQ_CHANGE).

I hope the details given here are useful. Thanks for the continuous support