Valuation areas in FI are used mostly in Foreign Currency Valuation. Unlike in classic GL in new GL they became mandatory in FCV. The usual approach is to create a valuation area per legal requirement – mostly represented by a country GAAP. Following such approach in an international company that operates in large number of countries would end-up in creating tenths of valuation areas.

The maintenance of it, variant creations for each country, complexity of description in user manuals would be quite uneasy.

As we all know exceptions make the SAP world brighter but there is a way to limit the exceptions in terms of valuation areas.

Valuation areas have an valuation method assigned, which indicate (among others) which FX rate type is used for valuation.

This concepts assumption is that an international company has 2 valuation requirements – one for group valuation and one for local valuation (accordingly to each country GAAP).

The group valuation follows EUR currency and ECB FX rates. ECB only publishes FX rates based on EUR but the valuation must be also able handle non-EUR-based currency pairs like USD/PLN – for which cross-FX-rate calculation can be used.

Local valuation is based on each National Bank FX Rate or ECB if country is based in EUR-zone.

There are 4 possible valuation procedures in SAP :


This actually means that, in very lean version, maximum 4 valuation areas – one per procedure should be enough to fulfil all local GAAP requirements.

For all valuation methods the same FX rate type would be assigned, which in this example will be named as ‘CLLL’. For each FX pair an alternative FX rate type representing the national bank FX rate.

Illustrating it in an example:

In such processing system will first access the USD/ RON in CLLL (assigned to valuation method) and using the alternative FX rate it will read the FX rate using CLPL rate type.

Such settings also enable using the reference currency for cross-currency calculation in 100% secure way – it is made sure that the cross-rate is calculated only based on one set of FX rates. Such cases can happen when a country can decide which FX can be used – like in Hungary, where company can choose between using ECB or Hungarian National Bank. In Hungarian case for an USD document there is no FX rate published officially by ECB – in such case it must be calculated using cross-rate scenario.

Rollout settings are basically restricted to only creating new currency pairs – without having a need to create a new valuation area.

The customizing will only show how to configure local valuation areas – setting for group valuation are following the same way but they do not require alternative FX rates to be used.

Now the translation rates can be defined.

At first the main FX rate must be used to reference the alternative FX rate: 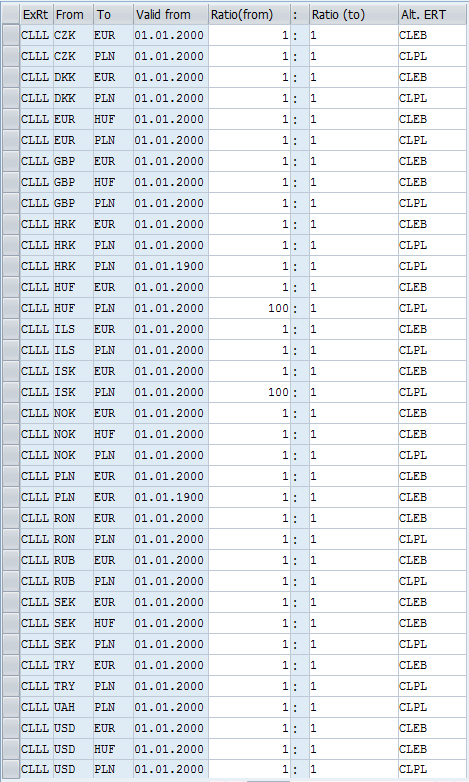 Then per National Bank the target FX translation rates are defined: 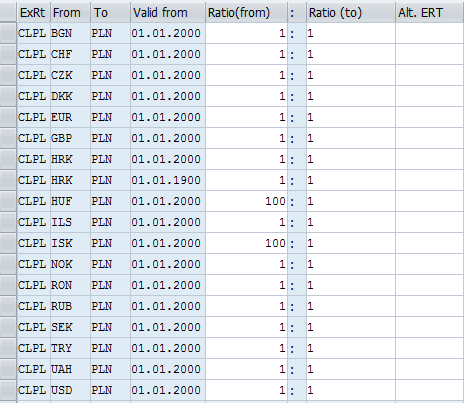 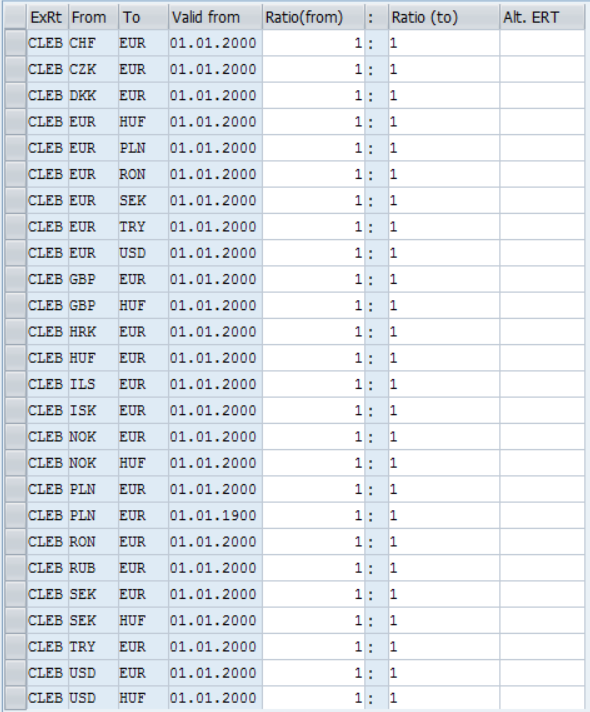 For cross-rate calculation the currency pairs must also be updated in the customizing (like USD/HUF)– no FX entry is needed.

Having the FX rate customizing done valuation areas can be set up, starting with creation of valuation methods:

There are 2 accounting rules – in Germany only loss can be shown, Poland and Hungary should show both gain and loss from FX valuation. For this 2 valuation method would be needed. 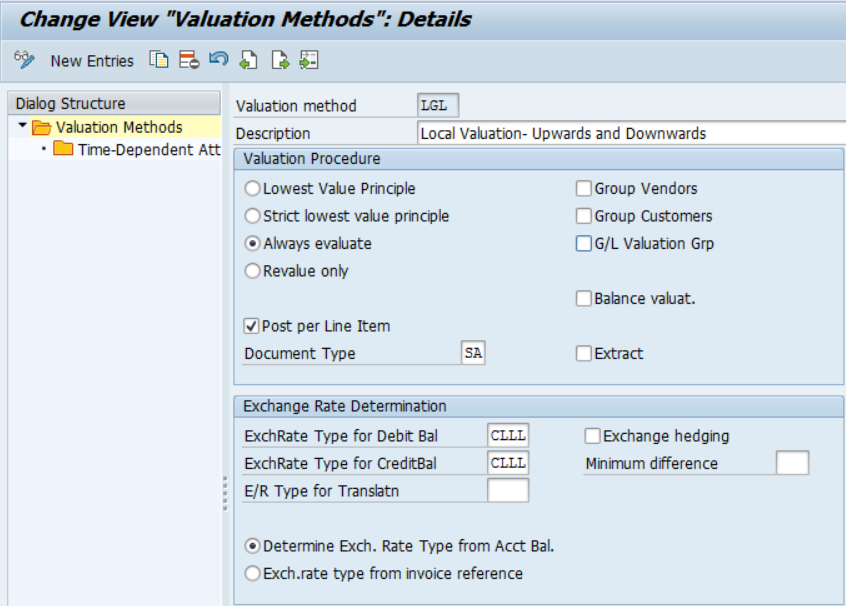 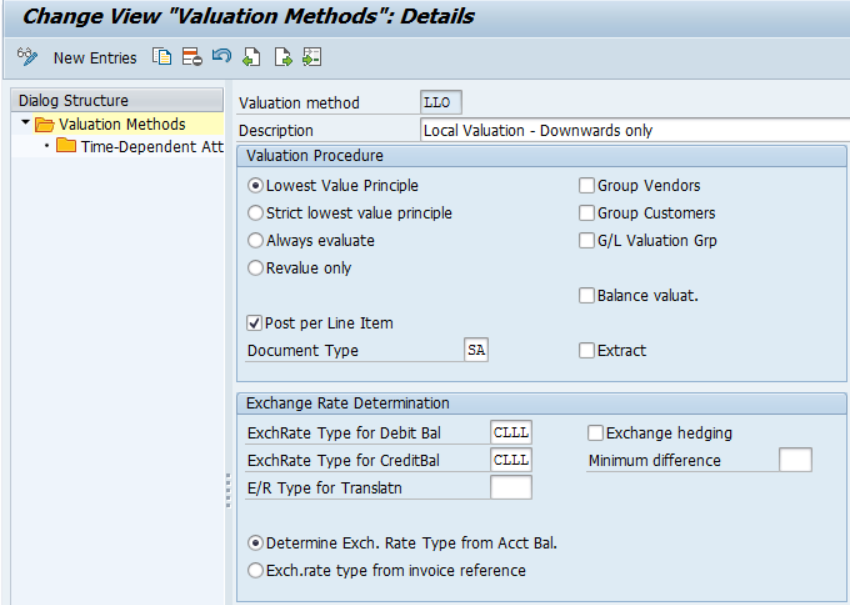 Based on that the valuation areas can be created:

In this example following valuation areas for vaulting currency type 10 are created:

Having valuation areas defined they should be assigned to accounting principle representing a ledger:

Basic settings for valuation areas are completed then.

To finish settings the account determination would be needed – it can be valuation-area-dependent or not. Both ways are supported and by that the ledger and accounts approach are supported. This can be done using (in ECC): 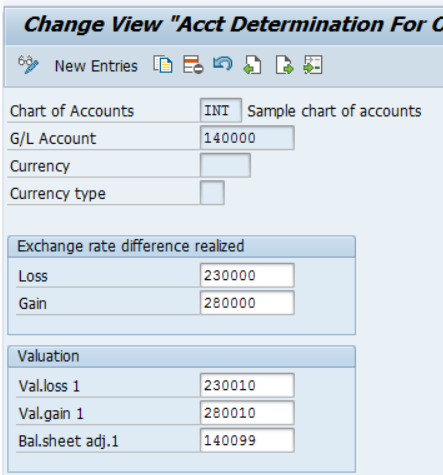 Having account assignment made customizing made the valuation areas customizing is finished. However, there are also additional settings which enable showing valuation values in line item reports like FBL1N/ FBL5N or FBL1H and FBL5H:

Here to the valuation fields used in structure RFPOSXEXT can be assigned to valuation areas:

These fields must also be defined as special fields in the line item display (table T021S – see note 984305 for more details):

The example shows valuation of companies existing in 3 abovementioned countries.

FX rates of ECB and Polish National Bank were maintained: 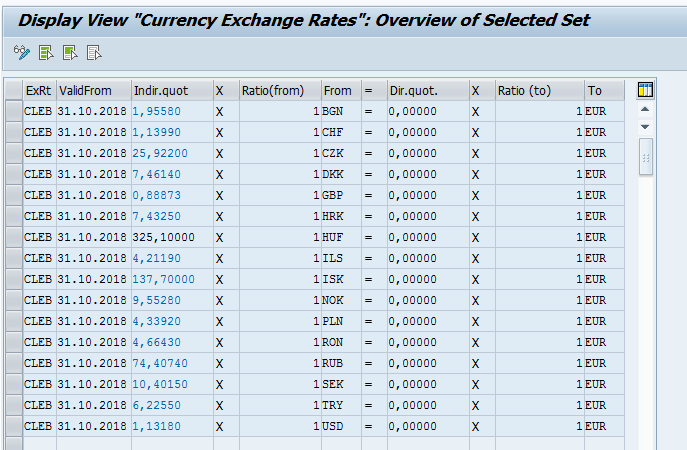 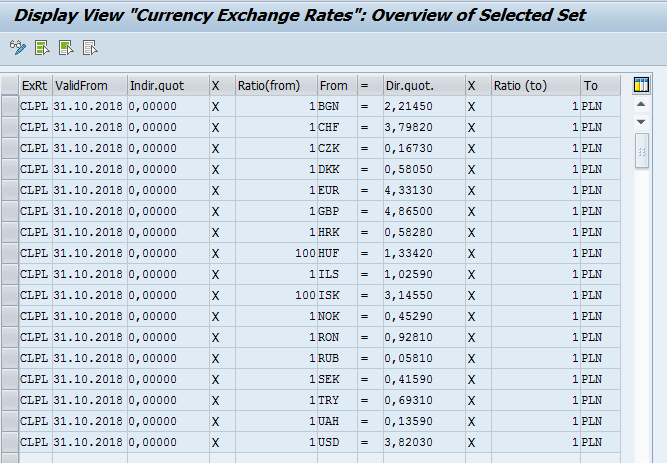 The documents were posted with different FX rate than used in valuation.

Valuation run done for each country: 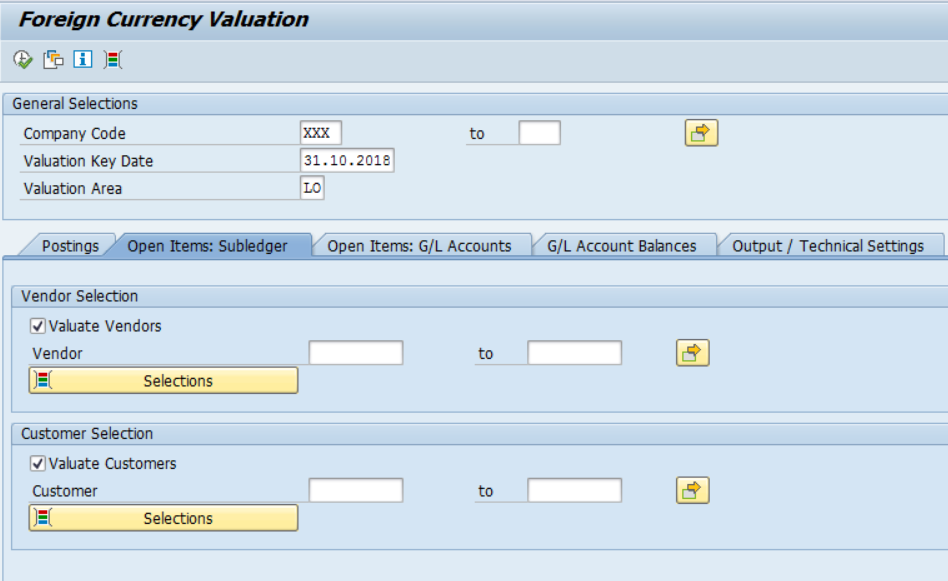 Valuation is performed with the FX rate entered in OB08 (it’s converted from indirect to direct in this example) for currency type CLEB for USD/EUR FX rate: 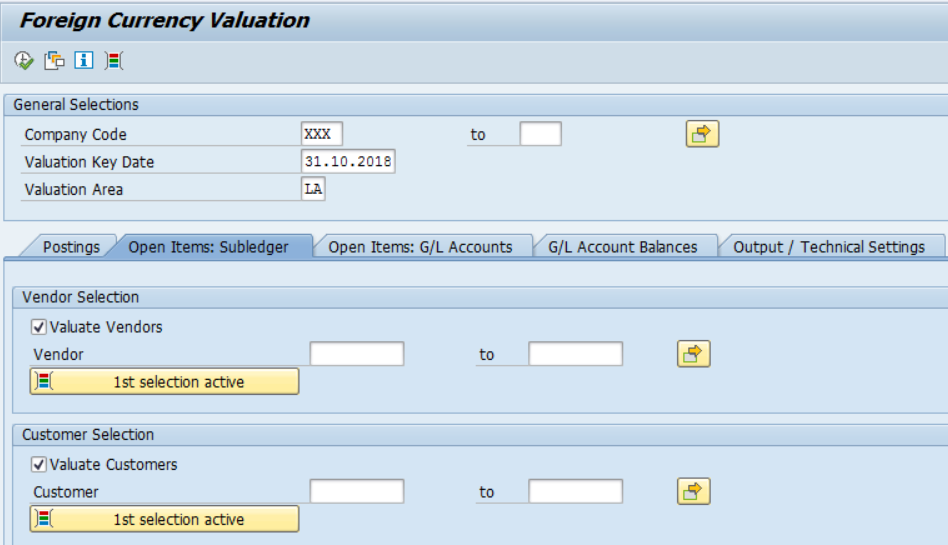 Valuation is performed with FX entered in OB08 for currency type CLEB and one cross-rate calculation for USD/HUF currency pair that is not provided by ECB:

System calculated an cross-rate for USD/HUF by using formula based on EUR currency (entered as reference in CLEB): 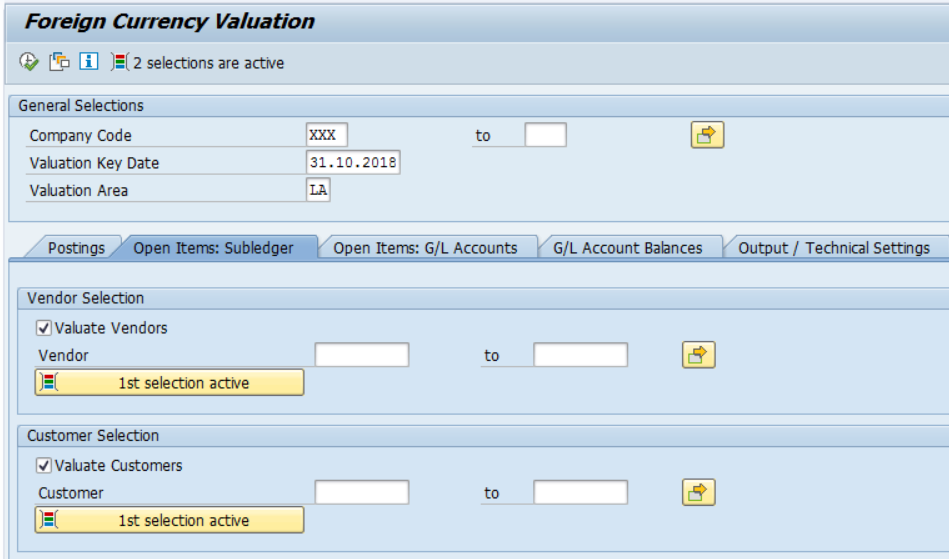 Valuation is performed with FX entered in OB08 for currency type CLPL:

As it can be seen one valuation area can provide different values if we set it up in a generic way.

Once valuation is posted the results of it can be seen in FBL1N/ 5N in column ‘Valuation Difference’: 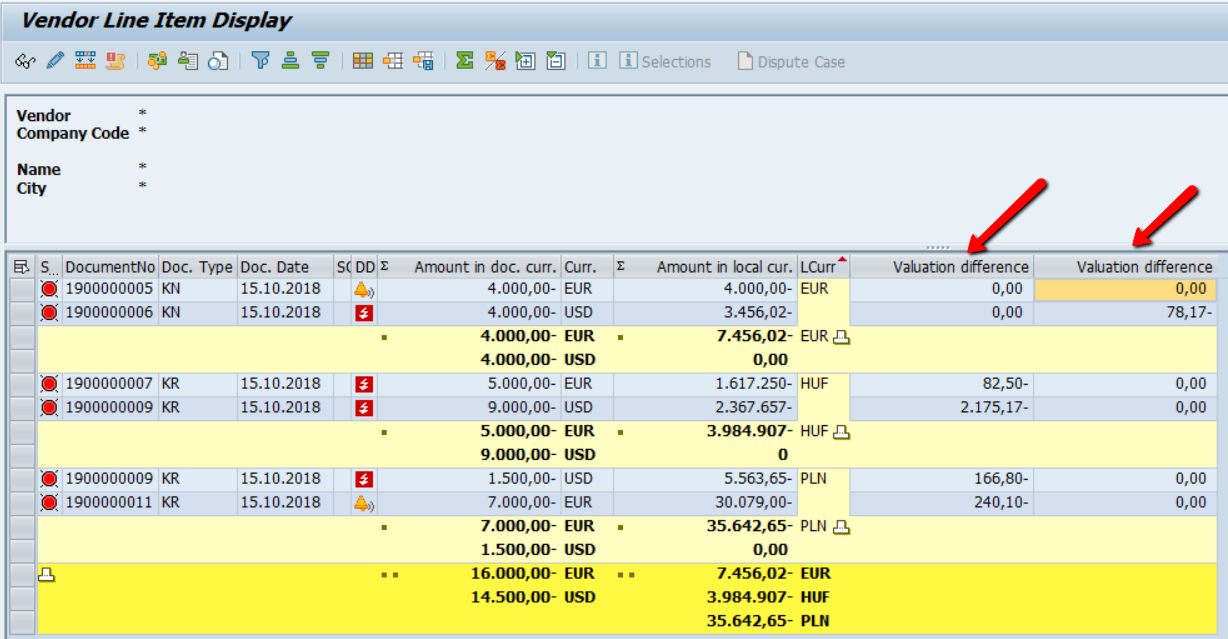 The highlighted columns contain the FAGL_FCV result shown in each valuation area.

The above examples shown that restriction of valuation areas is possible and brings a number of benefits:


On the other hand there are some constraints and some follow-up settings that must be kept if this approach is chosen:


Which approach to valuation areas have you chosen in your companies?